2 Euro Enlargement of the EU 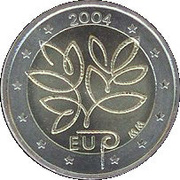 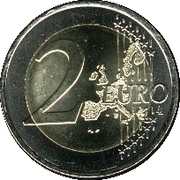 Fifth Enlargement of the European Union

The design describes a stylised pillar from which the sprouts grow upwards. The sprouts represent the enlargement of the European Union. The pillar represents the foundation for growth. Near the pillar there are the letters 'EU'. In the upper part of the coin there is the year '2004'. Twelve stars, together with the year, surround the design.