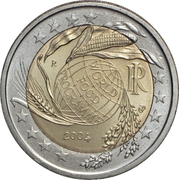 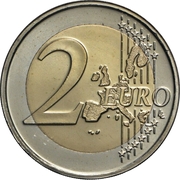 A globe tilted to the right bearing the inscription 'WORLD FOOD PROGRAMME' with an ear of wheat, an ear of maize and an ear of rice coming out from its border. The three grains representing the world's basic sources of nourishment. The monogram of the Italian Republic (and R superimposed over and I) appears to the right of the globe with a smaller combination of the letters U and P below, as initials of the engraver. To the upper left of the globe are the mint mark and the date with the 12 five-pointed stars in the outer rim representing the European Union.

This coin was not included in the 2004 Annual Collectors Series nor was it sold in a separate folder. However, commemorative blisters have been issued by FAO with a charity initiative. Made available through the branches of the Bank of Italy starting from 14 December 2004. These blisters are very rare