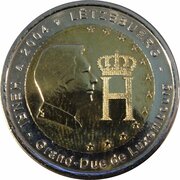 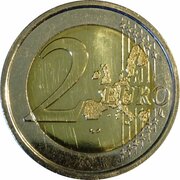 80th Anniversary of the use of Monograms on Luxemburgish Coins

The effigy of His Royal Highness, Grand-Duke Henri on the left side of the coin facing right with the monogram of Grand-Duke Henri (special letter 'H' topped with a crown) to the right. The 12 stars around the inner ring in a semi-circular form appear at the right of the monogram. The year 2004, surrounded by the mint mark as well as the engraver's initials, and the word LËTZEBUERG are written in circular form at the top of the ring. The words 'HENRI — Grand-Duc de Luxembourg' appear at the bottom of the ring.

» Buy coins from Luxembourg at eBay