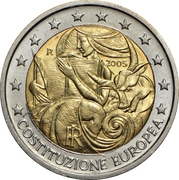 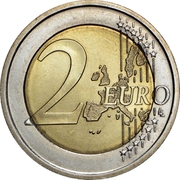 1st anniversary of the signing of the European Constitution

The center of the coin features Europa and the bull, with Europa holding a pen signing the text of the European Constitution and the mintmark to the upper-left with the initials of the engraver to the lower-left. The date is in the top-right above the head of the bull and the monogram of the Italian Republic slightly off-center at the bottom with the words "COSTITUZIONE EUROPEA" forming a semicircle underneath the central image, with the 12 five-pointed stars around the outer ring representing the European Union.