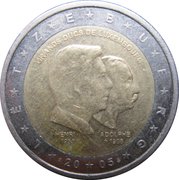 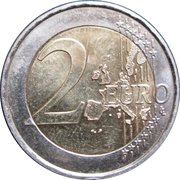 The effigy of Grand Duke Henri facing right superimposed on the effigy of Grand Duke Adolphe in the centre with a legend above, and their names and dates below. In the outer ring of the coin, the 12 stars of the EU surrounding the design are placed between the country name, the date, and the latter centred below the effigies and flanked by the letter ‘S’ on the left and the logo of the mint on the right.