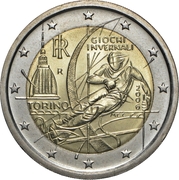 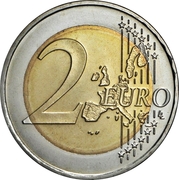 To the right the image of a skier during a downhill competition while to the left is a representation of one of the most famous Turin’s landmark: the Mole Antonelliana building. The location is marked also by the name of the city below the Mole. The skier and the image of the city are separated by a dynamic, curvilinear figure and more are in the background below the skier. These are the trails left by the skies. The monogram of the Italian Republic ‘RI’ and the mintmark ‘R’ are also to the skier’s left. The date, initials of the designer are to the right and the 12 stars of the European Union are around the rim, on the ring.