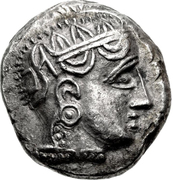 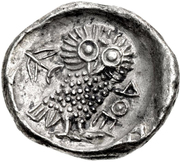 As can be seen from the style of both its images and inscription, as well as from the strangely 'fused' olive-spray and crescent, this coin clearly belongs to the same series as the curious 'folded flan' tetradrachms (CCK 152 ff.). These coins were probably minted in the Minaean kingdom (composed of several city-states) that was situated in the area of Wadi Al-Jawf northeast of Sana'a, and bordering the Sabaean kingdom to the south. As discussed by M. Huth ("Monetary Circulation" in CCK, pp. 86ff.), the folded-flan coins were probably produced by hammering imported coins (in all likeliness, Athenian tetradrachms) into a flat round that was subsequently folded once or twice, and then struck. Obviously, overstriking imported coins would have been a much easier way of producing new coins from existing ones, and one has to ask why the Minaeans chose such a cumbersome method of production. The present coin, however, proves that overstriking was indeed used concurrently with the folding technique. As a consequence, the folded flan technique becomes even more enigmatic. It would be most interesting to identify the undertype of the present coin. (source: Classical Numismatic Group, Auction 99 catalog, lot 376)

» Buy coins from the Minaean Kingdom