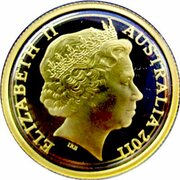 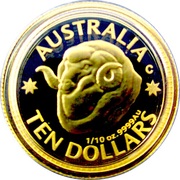 Head of the Merino Ram, which showed on Australian shilling coins (1938-1963) until Australia introduced decimal coinage. Seven pointed star to the left and right of the ram's head, C mintmark above right star.

The 2011 $10 Ram's Head 1/10oz gold proof coin was released by the Royal Australia Mint to commemorate the Merino ram's head design featured on the Australian shilling from 1938 to 1963. In conjunction with this gold proof coin, the Mint also released a NCLT $1 aluminum-bronze coin featuring the same design. NCLT $1 fine silver version with the C mintmark was also introduced.

The original design was modelled on a grand champion Merino at the Annual Sydney Sheep Show  in 1932, considered to be unmatched in the position of its head and horns. Named Uadry 0.1 after its home station, it became known as the Shilling Ram and represented Australia's growing wool industry.

The 1/10oz gold proof coin was only available by ballot, similar to the yearly Kangaroo at Sunset gold proof coin conducted in March 2011. According to the Royal Australian Mint website, the ballot was drawn on 4th Apr 2011. Each valid ballot form drawn will entitle a customer the right to purchase one gold proof coin at a cost of A$265.00 domestic and $241.73 International.

Each encapsulated coin was presented in a wooden case, with a unique candy-striped packaging reminiscent of the shearer's clothing featured in the famous 1890 Tom Roberts painting 'Shearing the Rams'.

Bullion value: 177.01 USD Search tips
This value is given for information purpose only. It is based on a price of gold at 56,917 USD/kg. Numista does not buy or sell coins or metal.