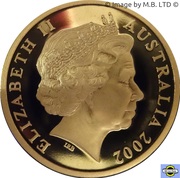 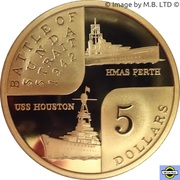 60th Anniversary of the Battle of Sunda Strait

This NCLT Aluminium-bronze proof coin was released by the RAM in 2002 to Commemorate 60 years since the Battle of Sunda Strait which occurred on 28th of February and 1st of March 1942. It was issued in a capsule in a plush grey presentation case which was inside a cardboard box.

The USS Houston and HMAS Perth were endeavouring to escape through the Sunda Strait following the Battle of the Java Sea some 24 hours earlier. The Houston and Perth had survived that disastrous battle but were low on ammunition and fuel. As they approached the entrance to the Strait near midnight, they unexpectedly encountered a Japanese covering force of nearly a dozen destroyers, three cruisers, and numerous torpedo boats that were protecting the Japanese invasion fleet. In the ensuing battle of Sunda strait, the Houston and Perth both agressively fired at the attacking Japanese ships at close range, but, outnumbered and outgunned, they were no match for the enemy forces that completely surrounded them. In the short fierce battle both the Houston and the Perth were sunk as were a number of enemy vessels. Out of the full crew of 681 on the Perth 350 personnel lost their lives, On the Houston out of a full complement of 1065 crew only 368 survived the battle.