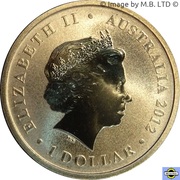 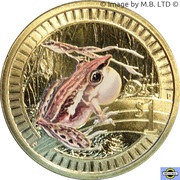 Two colourised Rocket Frogs, one sitting and one leaping. A Moth and Snail in the background

Issued by the Perth Mint in 2012 as part of a "Young Collectors " series of 6 coins. The other coins in the series depicted a Boxing Kangaroo, Marathon Butterfly, Rhinocerous Beetle, Sailfish & Cheetah. All coins were issued in Individual folding coincards.