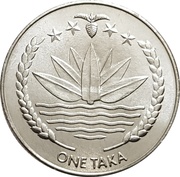 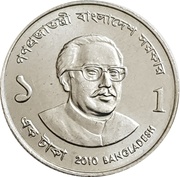 Face value in an octagon with the National Emblem of Bangladesh: a water lily bordered on two sides by rice sheaves. Above are a three-leaf clover of tea leaves and four stars representing the four principles of the first constitution of Bangladesh in 1972: nationalism, secularism, socialism, and democracy.

In top name of issuing authority in Bangla. In center is a portrait of Father of the Nation Sheikh Mujibur Rahman. In both sides numerical value of the coin is written in Bangla & English. In bottom value in words, year of issue and name of country is written.

Translation:
Government of People's Republic of Bangladesh
1 1
One Taka 2010 BANGLADESH