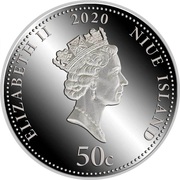 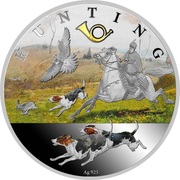 A scene of hsunting with a falcon, a rider on a horse in a hunting outfit from the second half of the 19th century, a pointer hunting dog chasing a hare and a falcon above them

Bullion value: USD 4.81 Search tips
This value is given for information purpose only. It is based on a price of silver at 650 USD/kg. Numista does not buy or sell coins or metal.