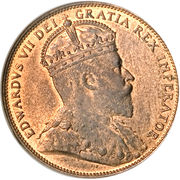 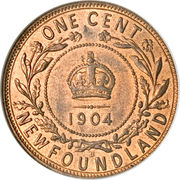 Translation: Edward VII, By the grace of God, King Emperor

Garland of purple pitcher plants (the island's emblematic insectivore plant) and oak leaves. The Royal Crown and the year of issue are visible in the centre of the coin.

The mint letter (H) can be found between "U" and "N" of "NEWFOUNDLAND".