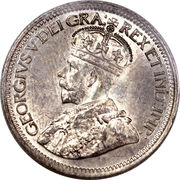 Translation: George V, By the grace of God, King and Emperor of the Indies

Face value and year of issue in the centre, surrounded by a decorative circle.

» Buy coins from Newfoundland at eBay