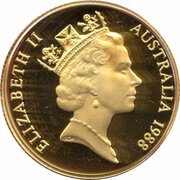 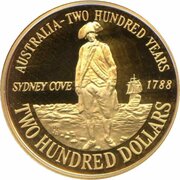 Sailor standing on the shore of Sydney Cove with ship in the background.

This coin was issued by the RAM in UNC and Proof finishes in 1988 to commemorate 200 years since the arrival of the first Fleet to Australia in 1788.

A member of this site wants to exchange it: SteveV

Bullion value: 552.33 USD Search tips
This value is given for information purpose only. It is based on a price of gold at 60 232 USD/kg. Numista does not buy or sell coins or metal.