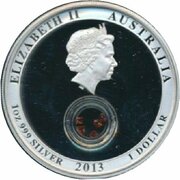 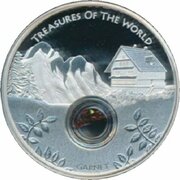 Series: Treasures of the World

Released by the Perth Mint to commemorate "Treasures of the World". There are three coins in the series. Garnet for Europe, Gold for Australia & Turquoise for North America. Fine Gold $100 versions of the coins were also released.

Bullion value: USD 24.16 Search tips
This value is given for information purpose only. It is based on a price of silver at 777 USD/kg. Numista does not buy or sell coins or metal.