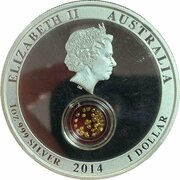 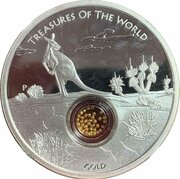 Series: Treasures of the World

Released by the Perth Mint to commemorate "Treasures of the World". There are three coins in the series. Garnet for Europe, Gold for Australia & Turquoise for North America. Fine Gold $100 versions of the coins were also released.