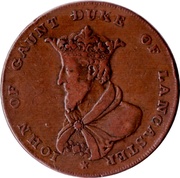 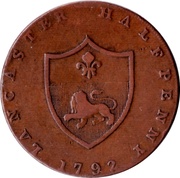 Crowned bust of John of Gaunt left, legend around, 5-pointed star below bust.

Note: centre point of crown between D and U, front pointing to U

Shield of arms with legend around and date below.

Note: line cuts between C and A, and P and E, point of shield between 7 and 9

Lettering: PAYABLE AT THE WAREHOUSE OF THOs WORSWICK & SONS . X .

The reverse featured the arms of the City of Lancaster, which takes elements from the Royal Arms of both England and France - the claim to the title of King of France was only relinquished by King George III in 1801 as part of the price paid for the Peace of Amiens.

Many mules and die varieties exist. The tokens were also extensively counterfeited and these copies continued, with various dates, up to 1794. Thomas Worswick was a banker, goldsmith and silversmith, and his premises were in New Street.