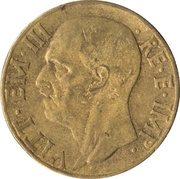 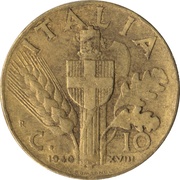 Crowned Savoy coat of arms superimposed on a fasces, with an ear of wheat on the left and oak leaves on the right and the value, date, and mintmark are at the base of the fasces, as well as the name of the engraver