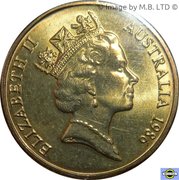 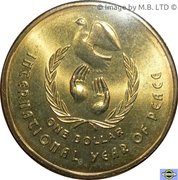 Symbolic Dove of Peace released from human hands
above Olive Wreath.
Legend below.

1986 was proclaimed the International Year of Peace by the United Nations and this was celebrated in Australia when the RAM issued a circulating one dollar design featuring a peace dove, hands and a wreath. These iconic peace symbols incorporated into the design put forward the values of the United Nations to continue peace efforts worldwide as not only an achievement but a continuing goal.

A Silver (.925) version of the coin dated 1990 was also released in a capsule in a plush presentation box.

This 1986 issued coin was also included in a special five coin UNC set in 1992 to celebrate the first five different one dollar designs issued between 1984 and 1992.