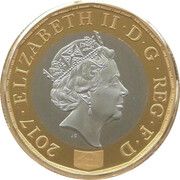 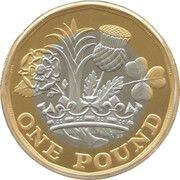 Fifth crowned portrait of Queen Elizabeth II right, wearing the George IV State Diadem, with holographic image below the bust and denomination as incuse micro-legend around the rim.

An English rose, Welsh leek, Scottish thistle and Northern Irish shamrock emerging from one stem within a royal coronet, with the minting year as incuse micro-legend around the rim.

The 'latent image' on the obverse is like a hologram that changes from a ‘£’ symbol to the number '1' when the coin is viewed from different angles.

Released as part of the 2017 annual gold set to commemorate the new 12-sided £1 coin, the design was also struck in nickel-brass, silver proof, silver piedfort and gold proof. Issue limit: 250. 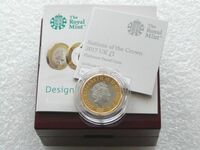 In 2022, a special Queen Elizabeth II Memorial Set featured on the obverse of the definitive types a privy mark which commemorates the life-span of The Queen (issue limit 96). 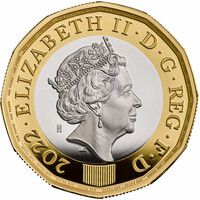 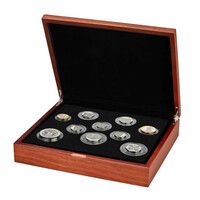 This value is given for information purpose only. It is based on a price of platinum at 32 982 USD/kg. Numista does not buy or sell coins or metal.