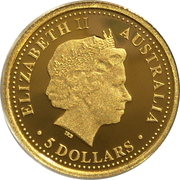 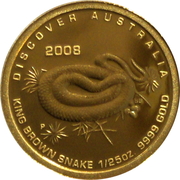 A King Brown Snake (Pseudechis australis), also known as the Mulga Snake because of its common occurrence in mulga woodlands. A member of the black snake family, it grows to three metres, eating a diet of rival snakes, lizard and mammals. Capable of injecting venom in much larger quantities than other species, it is regarded as one of the world's deadliest snakes.

Bullion value: 77.45 USD Search tips
This value is given for information purpose only. It is based on a price of gold at 62,778 USD/kg. Numista does not buy or sell coins or metal.