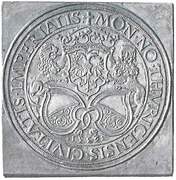 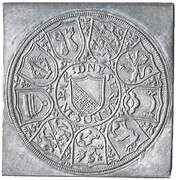 Two rampant lions supporting the crowned imperial coat of arms. Two mirrored shields with the coat of arms of Zürich below.

Coat of arms of Zürich in the middle, surrounded by nine shields with the coats of arms of Kyburg, Grüningen, Regensberg, Eglisau, Greifensee, Andelfingen, Knonau, Wädenswil, and Laufen.

Struck on a planchet weighing the equivalent of 1¼ thalers.
Two pieces are listed by Christian Winterstein, weighing 34.42g and 37.05g.

» Buy coins from Zürich, City of