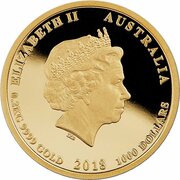 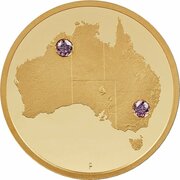 A stylized image of Australia with the two small pink diamonds marking the location of Ophir in the southeast, where gold was first found, and the Argyle Diamond Mine in the northwest. 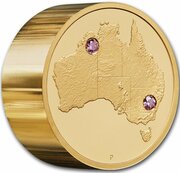 Inspired by the “holey dollar,” Australia’s first official currency, The Perth Mint in 2018 unveiled a Fine Gold collector coin that pays tribute to early prospector. With a mintage of one and valued at $2.48 million, Discovery is the Mint's most exclusive and notable numismatic release to date. 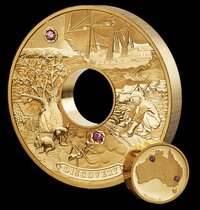 Created as an ongoing collaboration with Argyle Pink Diamonds' major authorised partner, Singapore-based John Glajz, The Perth Mint’s multi-million dollar masterpiece tells the remarkable story of two of the nation’s most treasured natural riches. Creatively inspired by the holey dollar which was introduced as Australia's first official currency in 1814, Discovery combines two of Australia's rarest and most precious elements. Every facet of its design is symbolic of the destiny and fortune pursued by early prospectors in their relentless search of gold and diamonds.

Bullion value: 12 045.24 USD Search tips
This value is given for information purpose only. It is based on a price of gold at 60 232 USD/kg. Numista does not buy or sell coins or metal.