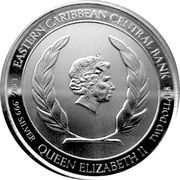 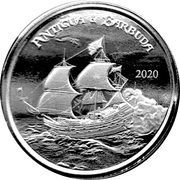 The obverse feature the effigy of Queen Elizabeth II in the center, framed by evergreen laurels on either side. A narrow band with inscriptions borders the rim.

The reverse featured a 18th century pirate ship under full sails, with dense clouds of smoke billowing from the gun ports.

Bullion value: 27.03 USD Search tips
This value is given for information purpose only. It is based on a price of silver at 870 USD/kg. Numista does not buy or sell coins or metal.

» Buy coins from Antigua and Barbuda