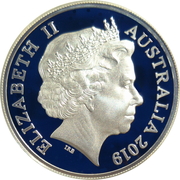 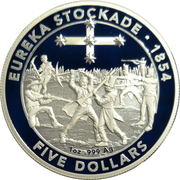 Stylised Southern Cross over a depiction of the fight between miners and soldiers at the Eureka Stockade.

When miners in the Victorian goldfields gathered behind a wooden stockade in 1854 to rebel against a harsh government, they did not know that their actions, under their leader Peter Lalor, would eventually to a more egalitarian Australian Government.This coin commemorates the uprising under the evocative Eureka Flag, and the the brave miners whose actions led to a more democratic government.

Bullion value: 27.03 USD Search tips
This value is given for information purpose only. It is based on a price of silver at 870 USD/kg. Numista does not buy or sell coins or metal.