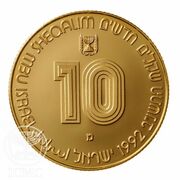 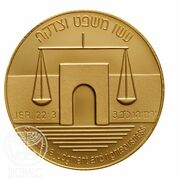 Face value in Hebrew and English. Above the face value is the Israel State Emblem, around the border, "ISRAEL" in Hebrew, Arabic and English and the mint year 1992 5752.

Scales of Justice over a gate with steps leading to it, biblical verse "execute ye judgment and righteousness" and reference, JER 22:3 in Hebrew around the upper border and in English around the lower border.

The Knesset is Israel's legislature. Its laws form the basis for the legal system. Ancient Jewish law is one of the sources applied to interpret the laws of the State. Israel does not yet have a complete written constitution, however there are "Basic Laws" which cover a broad variety of subjects, including the State, the Presidency, the Parliament, the Courts, the Government, the Army, and equality of the sexes. The court system consists of the supreme, district and magistrate courts. Judges are appointed by the President of the State. Courts of special jurisdiction include labor, military, and religious courts. The Israeli legal system enjoys public confidence at home and is highly regarded abroad.

Bullion value: 856.30 USD Search tips
This value is given for information purpose only. It is based on a price of gold at 55,060 USD/kg. Numista does not buy or sell coins or metal.