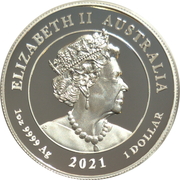 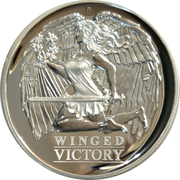 The coin’s outstanding high relief reverse depicts Nike in Art Deco style. Honouring an unseen hero with a victory laurel in the palm of her right hand, Nike’s muscular figure is enveloped in a beautifully symmetrical representation of feathered wings. Also included on the reverse is the inscription WINGED VICTORY and The Perth Mint’s ‘P’ mintmark.

In Greek mythology, Nike was invited to live on Mount Olympus by Zeus, the King of the Gods, as a reward for being his charioteer during the Titan War. Guiding Zeus’s horses through the battlefields, she is said to have bestowed fame and glory in the form of laurel wreaths on his victorious army. Since classical times, artists have often portrayed Nike as a winged figure symbolising victory in both war and peaceful competition.

In Australia she was the inspiration for Gilbert Doble's Winged Victory, created for the top of the Marrickville Soldiers' Memorial unveiled in Sydney after World War I. Having suffered considerably from the elements, the elegant copper statue was restored and permanently transferred to the Australian War Memorial in Canberra in 2013 as an object of national significance.

Bullion value: 26.74 USD Search tips
This value is given for information purpose only. It is based on a price of silver at 861 USD/kg. Numista does not buy or sell coins or metal.