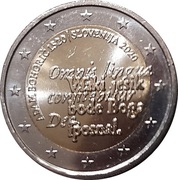 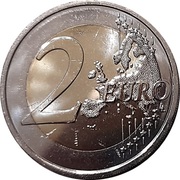 The 500th Anniversary of the Birth of Adam Bohorič

The design has at its core a multilingual slogan from the cover of Bohorič’s Latin – Slovenian
grammar titled “Proste zimske urice”. The slogan in Slovenian, written in bohoričica (the type of writing named after
Adam Bohorič), which is easily recognizable due to the use of a typical letter f, is positioned in the lower half of the coin’s
core. Behind is the Slovenian slogan in Latin – presenting Bohorič’s contribution to the international academic sphere. At
the top of the design, in semi-circle, is the inscription ‘ADAM BOHORIČ1520 / SLOVENIJA 2020’.
The coin’s outer ring depicts the 12 stars of the European flag.