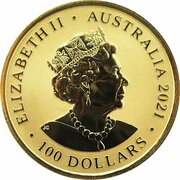 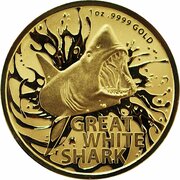 A Great White Shark with mouth open wide, teeth on full display, leaping and splashing out of the water.

This Fine Gold Coin was released by the RAM in a capsule, it is part of a stunning gold and silver investment coin series. Limited to a mintage of 250 coins.

A fearsome Great White Shark powerfully propels itself from the water on the reverse of this magnificent gold $100 investment coin. Complete with brilliant uncirculated finish and limited mintage, this coin is ideal for investors, collectors and those in awe of the Great White Shark’s beauty and strength.

The Great White Shark (Carcharodon Carcharias) is one of Australia’s most feared creatures, yet relatively little is known about them because of their elusive behaviour. Immortalised in cult classic, Jaws, the Great White Shark is the world’s largest known predatory fish and can grow up to six metres long. With up to 300 teeth across several rows and that replace themselves over the sharks lifespan, the Great White Shark tears its food into chunks before swallowing the pieces whole.

This apex predator is named after its white belly and features a grey upper body. Cruising at about 40 kilometres an hour, the Great White can propel itself up to 56 kilometres an hour in short bursts, such as when attacking its prey. They have been known to jump out of the water, breaching like a whale. While the predator has been found along Australia’s east, south and west coastlines, human interactions with the shark are relatively rare. With Great White Shark numbers thought to be decreasing, they are a protected species in Australia.

Bullion value: 1,952.16 USD Search tips
This value is given for information purpose only. It is based on a price of gold at 62,706 USD/kg. Numista does not buy or sell coins or metal.