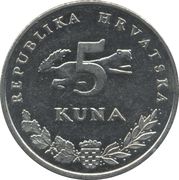 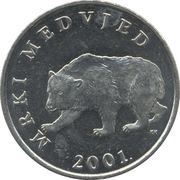 In center a marten is running to the right with the denomination in numerals on its outstretched body and the word "KUNA" below, the country name in the upper half-circle in Croatian. The arms of Croatian are in the center of the lower edge and a stylized laurel twig in bloom to the right and a sprig of an oak tree with fruit to the left.

A brown bear turned left in the center with its name in Croatia around the edge, the date in the middle of the lower edge and the artist's initials to the right.