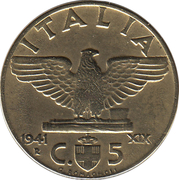 Eagle with spread wings holding a fasces in its claws. Below the crowned Shield of Savoia with value at sides. At its left date and mintmark; at its right the date in the fascist era; below the name on the engraver.