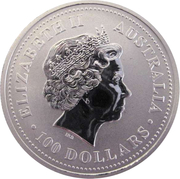 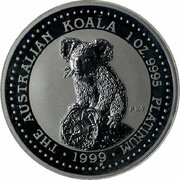 A Koala standing on a log chewing on eucalyptus leaves