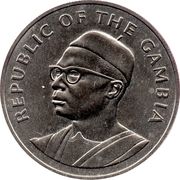 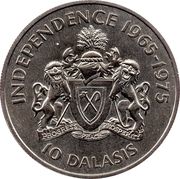 Lettering: REPUBLIC OF THE GAMBIA

Coat of arms of The Gambia, denomination below

A member of this site wants to exchange this coin: Andrej-Oslo

Bullion value: 8.30 USD Search tips
This value is given for information purpose only. It is based on a price of silver at 587 USD/kg. Numista does not buy or sell coins or metal.