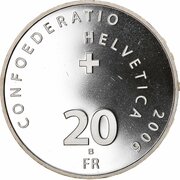 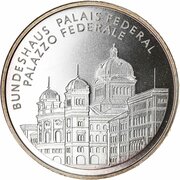 Exterior perspective of the Federal Palace of Switzerland in Bern, by Hans Wilhelm Auer.

The Federal Palace of Switzerland is a building in Bern housing the Swiss Federal Assembly and the Federal Council. The building was designed by the Swiss-Austrian architect Hans Wilhelm Auer and constructed between 1894 and 1902.

Members from this site want to exchange it: zdravko, batz

Bullion value: USD 12.92 Search tips
This value is given for information purpose only. It is based on a price of silver at 774 USD/kg. Numista does not buy or sell coins or metal.