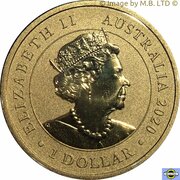 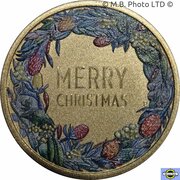 A decorative Christmas wreath made from Australian Flowers including Bottlebrush, Waratah & Kangaroo Paw in full colour surrounding the text in the middle.

Struck by the Perth Mint and released exclusively in 4 different PNC's by Australia Post.

Plus a Limited Edition of the both of the above versions limited to 300 Copies each.