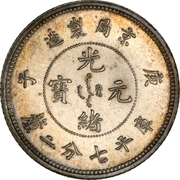 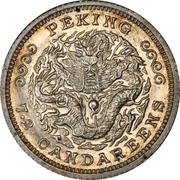 Dragon with pearl at centre surrounded by English legend.

The Peking Mint opened in 1899, and one later, these coins were minted as an attempt to establish a national silver currency. However, the Boxer Rebellion broke out that same year, which devistated Peking and destroyed the mint. Luckily, the original dies were saved, and restrikes were made in Hong Kong in 1947. While some actual patterns likely exist, most are restrikes (which are very rare themselves).

» Buy coins from the Empire of China