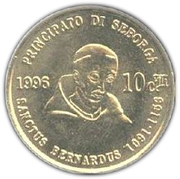 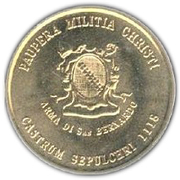 Shield of Order of St. Bernard.

The Principality of Seborga is a micronation located in the northwestern Italian region of Liguria, near the French border, and in sight of Monaco at 43°50'43"N, 7°42'0"E. The principality is coexistent with, and claims the territory of an area of 4 km², the town of Seborga which is an Italian municipality. Unlike most micronations, Seborga possesses an undisputed history as a feudal state as Constitutional monarchy.
Principality of Seborga is a self-proclaimed independent state in the Liguria region of Italy. Motto: Sub Umbra Sedi (English: Sit in the Shade). Musical Anthem: La Speranza. Languages: Italian, Ligurian and French.
Seborgs's Website can be viewed at http://seborga.net/ and http://www.masterweb.it/seborga/.

» Buy coins from the Principality of Seborga