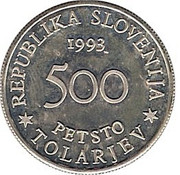 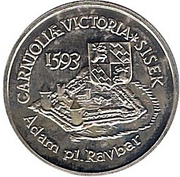 In the history of the Slovene nation there have been significant events which deserve to be particularly commemorated. Among them, there is the victory of Christian troops over the Turks in the battle fought in 1593 at Sisak, which means that to this year 1993, 400 years have elapsed since that event.
The battle in question ended many years´ threat of Turkish forays into Europe which hindered development of the then Carniola. Slovene knights, together with their troops did not retreat when numerically superior Turkish troops were assaulting the city of Sisak which was courageously repelling their attacks.
The fortress, located at the confluence of the rivers Sava and Kolpa was an important strategic point on the outskirts of Europe. Slovene troops, which were led by Andrej, count of Turjak and by Adam Ravbar, a nobleman, together with Croatian troops won on 22nd June 1593 a convincing victory.
The battle of Sisak remains one of the most famous exploits of the Slovene nation in its centuries-long engagement with the Turks. To commemorate this anniversary, the Republic of Slovenia has decided to issue the following three memorial coins. On the coins are depicted the motifs that symbolise that splendid historic victory by which, practically, the whole of the then Europe was relieved of great danger.
Accessed at: https://www.bsi.si/en/banknotes-and-coins/slovenian-tolar/commemorative-editions-republic-of-slovenia/400-years-anniversary-of-the-battle-at-sisak-1993

Bullion value: USD 10.47 Search tips
This value is given for information purpose only. It is based on a price of silver at 750 USD/kg. Numista does not buy or sell coins or metal.