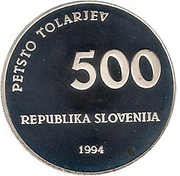 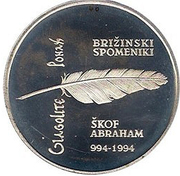 Quill
The Freising Manuscripts are the first Roman-script record of any Slavonic language.

The Freising Manuscripts are the first Roman-script record of any Slavonic language. They consist of three texts in the oldest Slovene, bound into a Latin Codex (manuscript book) from Freising in Bavaria. Four parchment leafs and a quarter of a page have been preserved. Linguistic, stylistic and contextual analyses reveal that these are church texts of careful composition and literary form.
The precise date of the origin of the Freising Manuscripts cannot be determined; the original text was probably written in the 9th century. They were discovered in 1807 in the Munich National Library during the examination of the manuscripts from Freising near Munich, which was once the centre of a diocese.
Bishop Abraham was active (from 957) in Freising during the time of the writing of the two manuscripts (sermons on sin and repentance, a confessional form), and also acquired a large estate of land in the Creina province around Škofja Loka. For this reason some linguists (e.g. Jernej Kopitar and Rajko Nahtigal) linked him closely to the origin of the Freising Manuscripts and, without any firm evidence, attributed him as being the author of one of the texts and suspected that he was of Slovene origin. Bishop Abraham died 1000 years ago, on 26 May 994.
The Freising Manuscripts are evidence of the thousand-year presence of the Slovenes in Europe. They are preserved in the Bavarian State Library in Munich.
To mark the thousand-year anniversary of the death of Bishop Abraham, linked to the Freising Manuscripts, the Republic of Slovenia is issuing three commemorative coins. On these coins, using the original script, are imprinted the words "Glagolite ponaz" with which the first Freising Manuscript begins.
Accessed at: https://www.bsi.si/en/banknotes-and-coins/slovenian-tolar/commemorative-editions-republic-of-slovenia/1000-years-anniversary-of-the-death-of-bishop-abraham-connected-with-the-freising-manuscripts-1994

Bullion value: USD 10.40 Search tips
This value is given for information purpose only. It is based on a price of silver at 750 USD/kg. Numista does not buy or sell coins or metal.