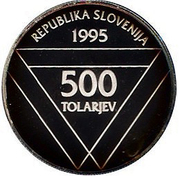 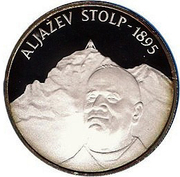 Centennial of Erection of Aljaž turret

Value within triangle design below date

Head of Jakob Aljaž facing in front of mountain Triglav

With its 2864 meters, Triglav is, with its solemn head rising high into the blue sky, the highest peak in the Julian Alps. With its overwhelming image it attracts the look of a rambler, excites his imagination and stirs up a burning desire for discovery and adventure.
Triglav , the symbol of the mountains, is deeply anchored to the Slovene national consciousness. The priest Jakob Aljaz, who noticed the quick intrusion of foreign influence in the Slovene mountains during his service at Dovje, was well aware of this fact. He tried to resist that intrusion with the heart and soul of a conscious Slovene. Therefore he bought the Triglav Peak and Kredarica for 5 guilders. In this way, no one could stop him perching a turret with the most necessary equipment on top of his own land in 1895, and thus he "preserved the Slovene appearance of the Slovene mountains". The turret of a height of 1.90 m and a diameter of 1.25 m had four small windows. Jakob Aljaz gave the shelter called the "Aljaz Turret" to the Slovene Alpine Society as a present.
Jakob Aljaz was born in 1845 in Zavrh under Smarna gora. After High School in Ljubljana, he went to Vienna to study philosophy, but soon changed the subject of study to theology. From 1889 until his death in 1927 he served as a priest in Dovje in Upper Carniola. He had all-round talents and therefore won respect and publicity during his lifetime. As a composer, he expressed his love for his country in compositions (Triglav, my home and Slav, rise). He played an important role in the development of Slovene mountaineering, since he gave the initiative for, and helped in the construction of, various mountain huts in the Triglav region, as those of the Staniceva Hut, the Triglav Hut, the Chapel on Kredarica, and the Aljaz Hut in Vrata. Certainly, the most important was the setting up of the Aljaz Turret on top of Triglav, because thanks to Jakob Aljaz, Triglav became a Slovene national symbol.
To mark the 100th anniversary of the setting up of the Aljaz Turret, which coincides with the 150th anniversary of the birth of the patriot, the writer and composer Jakob Aljaz, the Republic of Slovenia hereby issues three commemorative coins.
Accessed at: https://www.bsi.si/en/banknotes-and-coins/slovenian-tolar/commemorative-editions-republic-of-slovenia/100-years-of-the-setting-up-of-the-aljaz-turret-1995

Members from this site want to exchange it: mogollolandia, zdravko

Bullion value: USD 10.85 Search tips
This value is given for information purpose only. It is based on a price of silver at 782 USD/kg. Numista does not buy or sell coins or metal.