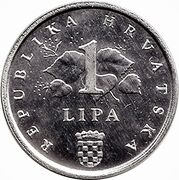 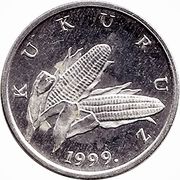 A stylized branch of linden in inflorescence in the center and the value in numerals on the leaves and the word "LIPA" below. The arms of Croatia are in the middle of the bottom of the coin with the country name starting to the left going around the rim ending on the right of the coat of arms

Smooth
NOTE: This isn't the picture of the edge but you can see the difference between the year with a dot and without a dot