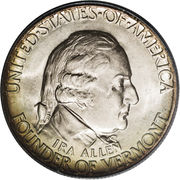 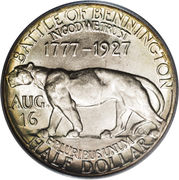 Ira Allen, the founder of Vermont and one of the Green Mountain Boys, who would defeat the British at the Battle of Bennington.

Image of a catamount or cat o' mountain, cat of the mountain.

The 1927 Vermont Sesquicentennial Half Dollar was issued to commemorate the 150th anniversary of the Battle of Bennington and the independence of Vermont. This occurred in 1777, and it was not until 1791 that Vermont would join the Union.

Designs for the coin were by Charles Keck, who had earlier create the design for the Panama-Pacific Gold Dollar. His design for the 1927 Vermont Half Dollar was executed in the highest relief of any early commemorative half dollar issued.

The original issue price for the Vermont Sesquicentennial Half Dollar was $1, with sales conducted by the Bennington Battle Monument and Historical Association. Out of the maximum authorized mintage of 40,000 pieces, a total of 28,142 were distributed and the rest were returned to the Mint for melting.