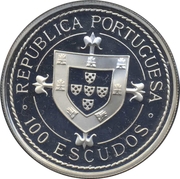 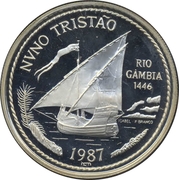 Series I of Discoveries: Navigations & Discoveries of the Western Coast of Africa - Nuno Tristão

A caravel with lateen sails, the boat used by Nuno Tristão during his navigations down the coast of Africa (ordered by Henry, the Navigator). In 1446 during his last voyage, he reached the river Gambia. Date of the coin below.

A member of this site wants to exchange it: duarte1263

Bullion value: USD 9.34 Search tips
This value is given for information purpose only. It is based on a price of silver at 612 USD/kg. Numista does not buy or sell coins or metal.