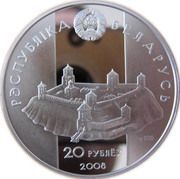 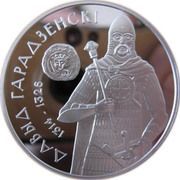 Series: Strengthening and Defending the State

At the top – the relief image of the State Coat of Arms of the Republic of Belarus and a circumferential inscription: РЭСПУБЛІКА БЕЛАРУСЬ (THE REPUBLIC OF BELARUS); in the center – the reconstruction of the fortified castle of ancient Novogorodok (at present – Novogrudok); beneath – the inscription 20 РУБЛЁЎ (20 RUBLES); and the year of issue; and the right – alloy standard.

In the center – the relief image of Davyd of Garadzen; on the left – the impress of a loppy seal used for official charters with an image of Prince Dovmont Nalshansky who ruled under the Christian name Timofey and was, according to one of the versions, father of Davyd of Garadzen; and circumferential inscriptions ДАВЫД ГАРАДЗЕНСКІ (DAVYD OF GARADZEN) and the years of his service 1314–1326.

Translation: STRENGTHENING AND DEFENDING THE STATE

Bullion value: USD 19.87 Search tips
This value is given for information purpose only. It is based on a price of silver at 639 USD/kg. Numista does not buy or sell coins or metal.

» Buy coins from Belarus at eBay