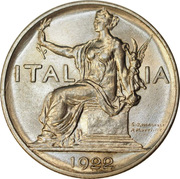 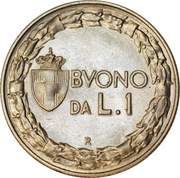 Female draped seated figure facing left; holding a little statue of a winged victory in the lowered left hand, and an olive branch in the outstretched right hand. Lettering divided by figure, date below exergue line.
At the right of the pillar, the name of the author and of the engraver.

Value on two lines, with crowned Savoy Shield at left. Mintmark below. All in a circle of laurel branches.