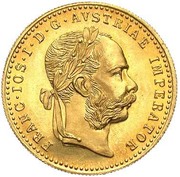 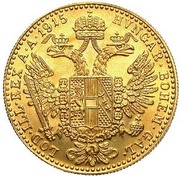 Translation: Franz Joseph I, by the grace of God, Austrian Emperor

Arms of Austria superimposed upon a crowned double-headed Imperial eagle.

The ducat with date 1915 is still officially minted by the Austrian mint. Mintage is as follow, but the year can't be distinguished: 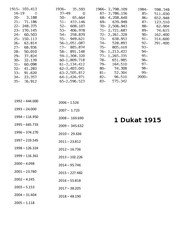 In the early 20th century, Balkan countries used Austrian ducat coins as bullion reserves. It is widely understood that the various states further marked their bullion supply with small countermarks (a sword for Bosnia, a crown for Bulgaria, a grain ear for Serbia and an eagle for the Kingdom of Serbs, Croats, and Slovenes), but those marks are just a designation of a verified fineness of the gold and not "intended to refer to a geographic area".

Some known countermarked dates according to Aleksandar N. Brzić are: 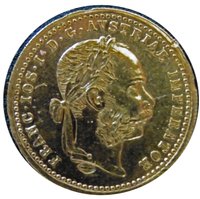 Bullion value: 193.35 USD Search tips
This value is given for information purpose only. It is based on a price of gold at 56,188 USD/kg. Numista does not buy or sell coins or metal.