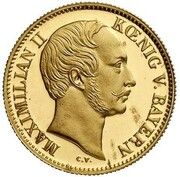 Head to the right

The mines of Goldkronach, located near Bayreuth, which were extremely productive in the 14th and 15th centuries, produced only small mines in the 19th century. Therefore, the two ducats from 1803 (Schlumberger 554.2) and from 1855 from the Goldkronach mine are the rarest and most sought-after gold coins of the 19th century. The Goldkronach mining ducat of 1855, which, however, was minted only after 1855, was also among the most expensive coins in the auction of the collection of mining coins of the mining councilor Dr. Karl Vogelsang (Auktion Riechmann 35, Halle 1925, No. 51), where the piece fetched the enormous price of 1800 Reichsmark. On the question of whether the coin metal for the few strikes from the pair of dies of this ducat originated from the Goldkronach mine at all, see C. F. Gebert, Beiträge zur fränkischen Münzkunde - Goldkronach und seine Ausbeutemünzen, in: Mitteilungen der Bayerischen Numismatischen Gesellschaft 25, Jahrgang 1906/1907, pp. 24-27, where the project of such a mintage is mentioned for the first time. A heavy specimen (4.49 g) can be found in H. Buchenau, Probeprägungen für den bayerischen Goldkronacher Ausbeutedukat 1855, in: Blätter für Münzfreunde 49, Jahrgang 1914, Nr. 2, Sp. 5502. There it is described that this mintage first appeared in trade in 1913. The few known specimens were therefore probably minted between the years 1906 and 1913.

This value is given for information purpose only. It is based on a price of gold at 56 412 USD/kg. Numista does not buy or sell coins or metal.

» Buy coins from the Kingdom of Bavaria at eBay