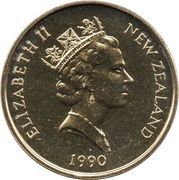 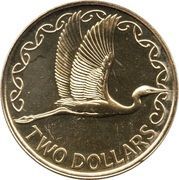 Kotuku (white heron) surrounded by a Maori motif, denomination below.

Robert Maurice Conly (1920 - 1995 ) was a designer of coins and postage stamps from Wellington, New Zealand. As a painter, he is known for his representations of the Antarctic.

Fully milled with an Incuse channel with 10 raised dimples

The Kōtuku or Whte Heron is one of New Zealand's rarest birds and is held in high regard in Māori mythology.

There are no 1993 issues of this coin. the Kingfisher commemorative $2 was issued in that year. (See link)

1997 circulation issues were recalled in January 1998 because a slight variation in the metal composition resulted in many parking, gaming and vending machines rejecting them. This affected the coins' electrical conductivity, which is used as an authenticity test by many of these machines. It is unknown how many 1997 $2 coins remain in circulation.