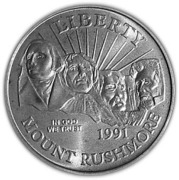 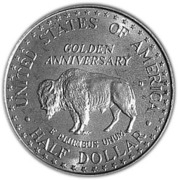 North Western American Bison, also commonly referred to as a buffalo. There are fifty stars positioned around the outer edge of the coin.

After issuing just a single commemorative coin in the previous year, for 1991 three programs comprising five different coins were authorized. The 1991 Mount Rushmore Half Dollar was issued as part of a program celebrating the 50th anniversary of the Mount Rushmore National Monument. The clad half dollar was issued along with a silver dollar and $5 gold coin.

The Mount Rushmore Half Dollar carried a maximum authorized mintage of 2,500,000. The proof version of the coin was minted at the San Francisco Mint and the uncirculated version at the Denver Mint. The coins were available individually or as part of two, three, or six coin sets incorporating the silver dollar and $5 gold coin.

Half of the surcharges raised through the program were used to enlarge and renovate the memorial. The other half was placed in the Treasury General Fund to reduce the national debt.